You are here: Home / Mayo

is a beautiful beach set in a cove on the outermost reach of Achill Island. Quite often dolphin & seal can be seen near to the beach. Summer or winter it’s such a beautiful place to visit. Safe swimming & with spring water trickling down from the mountains the children have a ball. A location that needs to be seen to be appreciated. 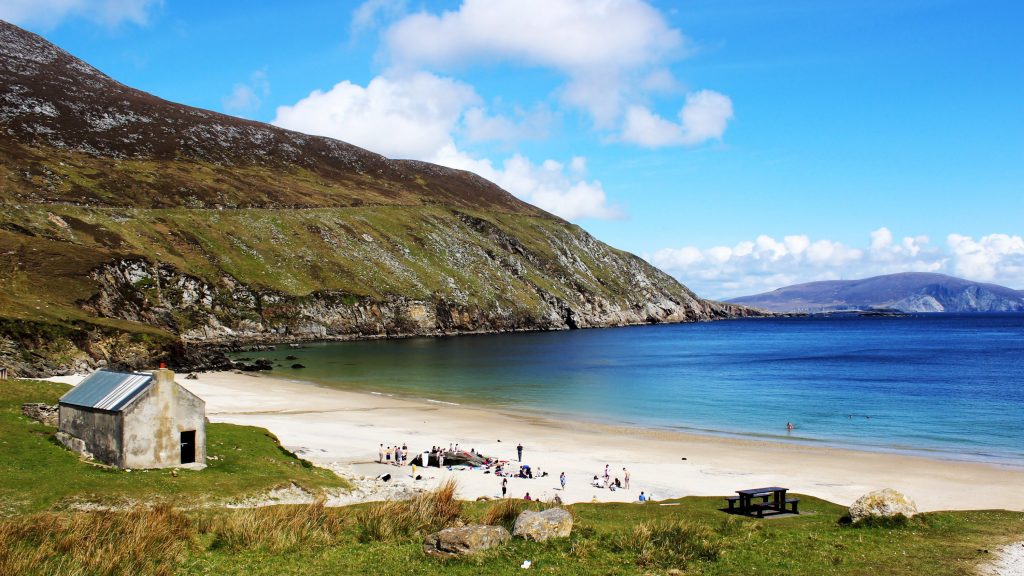 or better known as Croagh Patrick, is located about 8 kilometres from Westport, above the villages of Murrisk and Lecanvey. If the weather is good the views over Clew Bay are simply spectacular, looking down on all those islands you can witness from above! Note that the temperature can drop a few degrees, and warm waterproof clothing recommended. 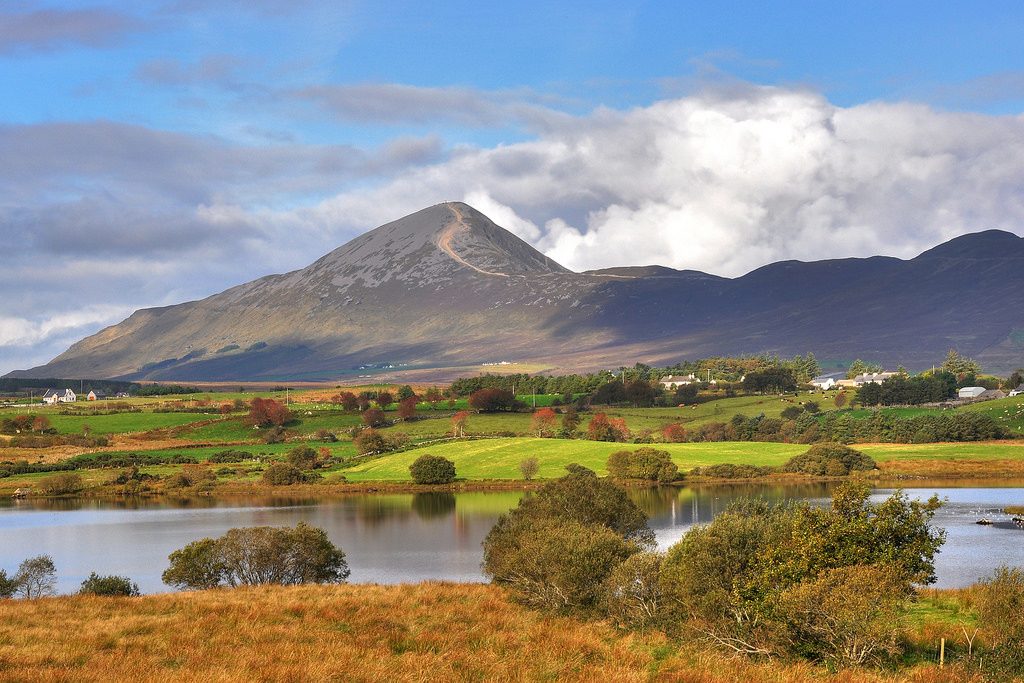 Croagh Patrick rises to 762m. It is best to climb in summer (April to September)

There is a visitor centre is situated in Murrisk on the Pilgrim’s path at the base of Croagh Patrick Mountain and opposite the National Famine Monument.

There is a craft shop inside and a coffee shop.

is a majestic place site found about 5km in north of Ballycastle village. Jutting out into the ocean and rising almost 40m above the waves, it offers a beautiful view of the Atlantic, including the unique collection of islands known as the Staggs of Broadhaven. Also, you can see the spot the nearby Dun Briste sea stack with its different coloured layers of rock and nesting sea birds. In addition to the natural scenery and wildlife, Downpatrick Head is home to the ruins of a church, holy well and stone cross, which together mark the site of an earlier church founded by St Patrick.
In the past, Downpatrick Head was a popular destination for pilgrims, who came here each year on the last Sunday of July, known as “Garland Sunday”. Today, this tradition lives on and mass is still celebrated at Downpatrick Head on that same day. 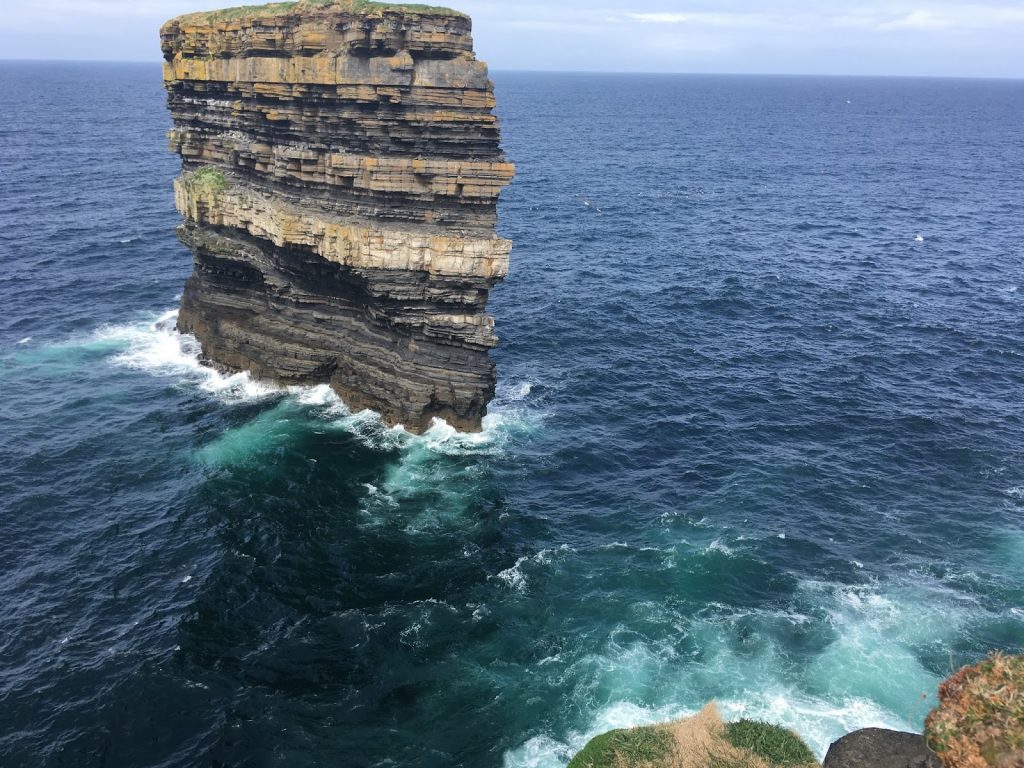 Departure: Ballina City Bus Station in Mayo County
Arrival: Ballycastle City and walk around 1hour to get to DownPatrick Head.

Its size (24 km for 19km long) makes it the widest island of all Ireland. Famous for its many archaeological sites, Achill Island has been marked by the construction of many megalithic and Roman sites, as well as many forts. Add to that impressive landscapes, a diverse fauna and flora, and you will know that the island is really worth a visit!

The Great Western Greenway’s development was made possible by agreement of local landowners who allowed permissive access to users to pass through their lands.

The route offers gentle gradients and some of the most idyllic scenery in the West of Ireland. It passes by some of the West of Ireland’s most dramatic mountains and offers magnificent views of Clew Bay and its many islands. The route forms part of the National Cycle Network, and it is the longest off-road cycling experience in the country. The ends of the Greenway lie at Westport and Achill, both in County Mayo and the route passes through the picturesque villages of Newport and Mulranny. There are numerous places to rent a bicycle from in the surrounding towns. 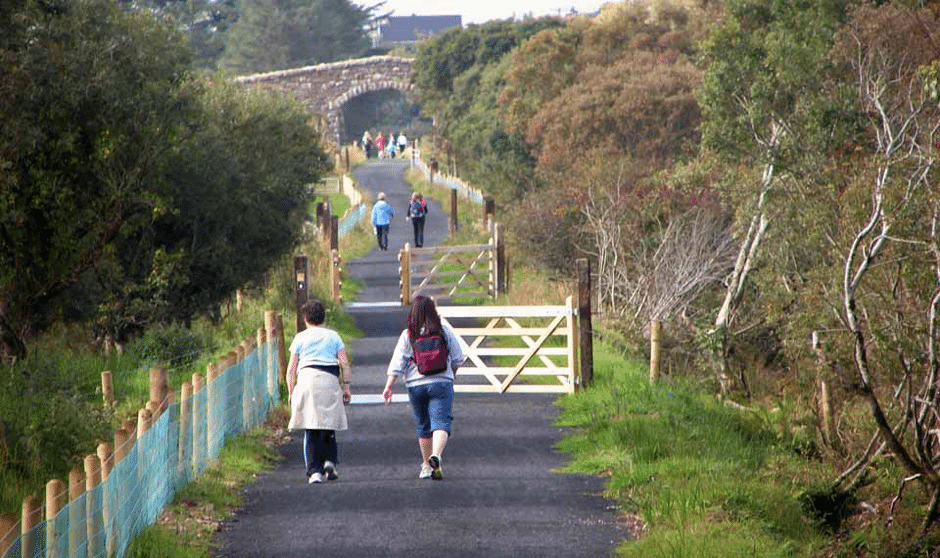 Blacksod Bay (Irish: Cuan an Fhóid Duibh) is a bay of the Atlantic Ocean in Erris, North County Mayo, Ireland. The 16 km (9.9 mi) long and 8 km (5.0 mi) bay is bounded on its western side by the Mullet Peninsula. Its eastern side includes Kiltane Parish, which extends southwards from Belmullet towards Gweesalia and Doohoma.

Blacksod Bay, which contains many little islets, opens to the Atlantic Ocean. The granite found in this area as most of the rest of the substrate consists of ancient gneiss and schist. The Mullet peninsula is covered with fairly flat sand dunes. Blacksod Bay is wide at its mouth and is a safe place for anchorage.

At its northern end, Blacksod Bay is connected to Broadhaven Bay by an 18th-century canal through Belmullet.

Blacksod Lighthouse, which was completed in 1862, lies 18 km (11 mi) off shore out in the Atlantic Ocean. It was built from locally cut granite taken from the quarry at Termon Hill. Eagle Island lighthouse lies off the northwest tip of the Mullet. It is famously the lighthouse the allies used for the weather forecast on D-day 1944, and the landing was delayed by a day because of an inclement forecast.

Throughout the summer, boat trips to the Inishkea Islands, Inishglora, where the Children of Lir are reputed to be buried and Duvillaun off the North Mayo coastline leave from Blacksod. Elly Bay is a popular location for many watersports and the location of Colaiste Uisce Adventure Centre, which teaches watersports and other sports through the medium of the Irish language to schoolchildren and adventure groups from across Ireland. 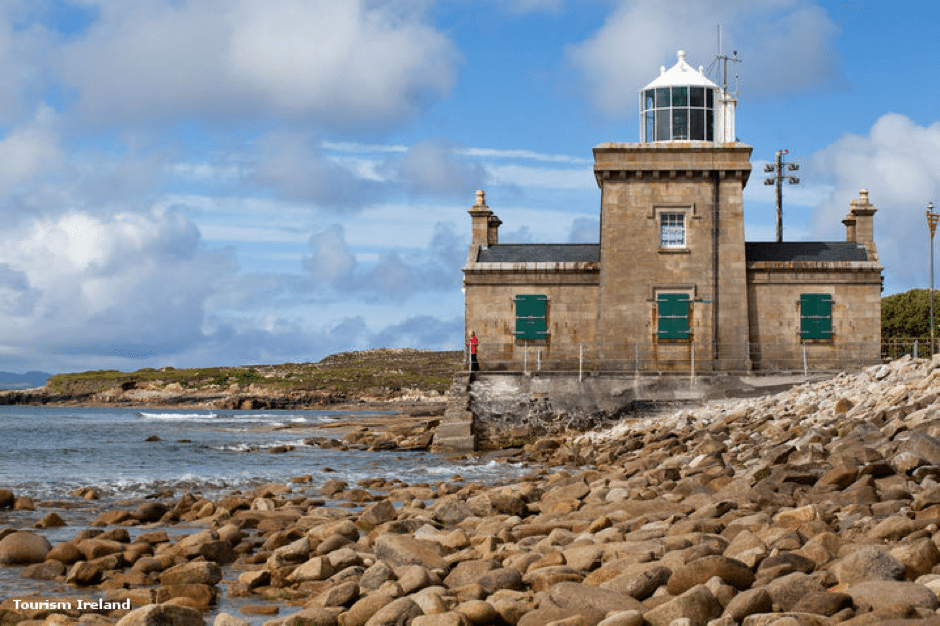 Travel by bus: Bus Éireann route 446 links the area with Belmullet, Bangor Erris, Bellacorick, Crossmolina and Ballina. There is one service a day in each direction, including Sundays. On Friday evenings an extra journey operates from Ballina.Onward bus and rail connections are available at Ballina.

The Westport Seafood Festival, organised in early September in Westport, is above all an opportunity to meet and discover the best of Irish gastronomy. The festival is realized in a warm and sharing atmosphere. You can participate in culinary workshops (attention, some are paid) and exchange with local producers.

Car Park in the city 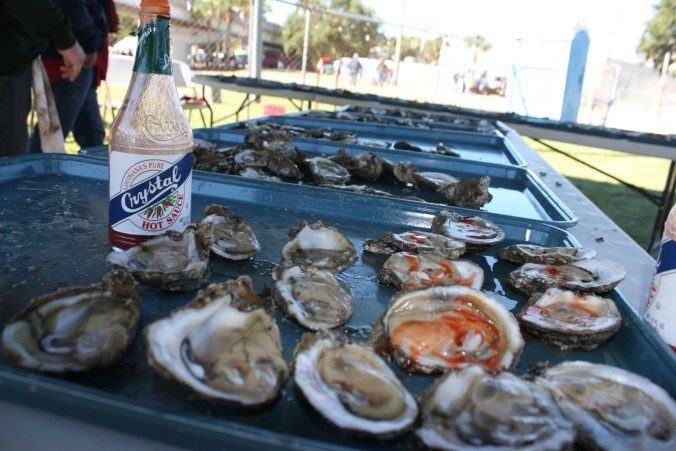 Moyne Abbey, close to Crosspatrick, lies on the west side of Killala Bay, near Ballina. It is one of most impressive ecclesiastical ruins in Mayo and a National Monument. It was a friary founded in 1460 by McWilliam Bourke, a member of the Barret family, for Franciscans of the Strict Obedience and was one of the chief houses of study for young Irish Franciscans. The friary was consecrated in 1462. 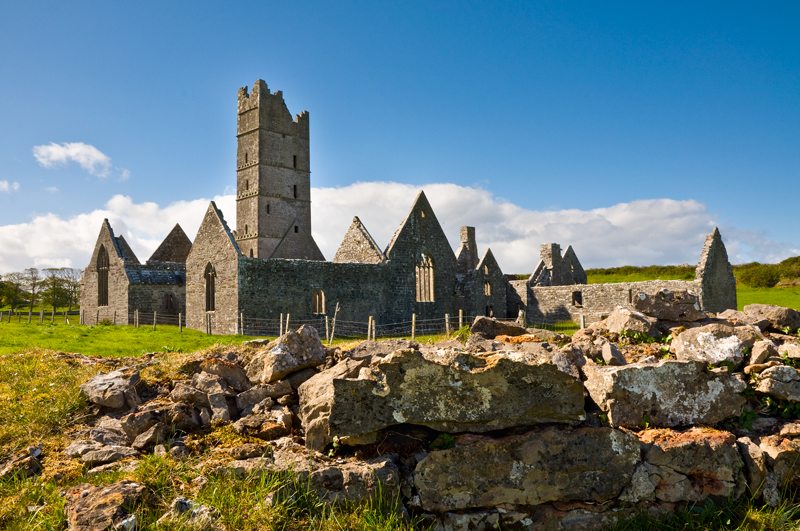 is a limestone loughin Counties Galway and Mayo, Ireland, north of Lough Corrib. Lough Mask is the middle of the three lakes, which empty into the Corrib River, through Galway, into Galway Bay. Lough Carra flows into Lough Mask, which feeds into Lough Corrib through an underground stream which becomes the River Cong. Lough Mask is the fourth largest lake, by area, in Ireland and the sixth largest lake in the island of Ireland.

Slievemore is an impressive ruined village located on Achill Island in Mayo County. Considered as a pure example of a traditional stone village, the site dates back to the 12th century and is now deserted. The site is very popular, and is one of the must see on the island!

Builton the southern slope of Slievemore Mountain, the village consists of more than one hundred dry stone cottages, aligned on a rather surprising north-south axis. Stretching over 2km long, this ghost village would have developed over several centuries, from the Anglo-Norman period (12th century), until the 20th century.

2 km from Keel, by the Doogort road. Follow the sign indicating “Deserted village”; it is to the left of the cemetery. 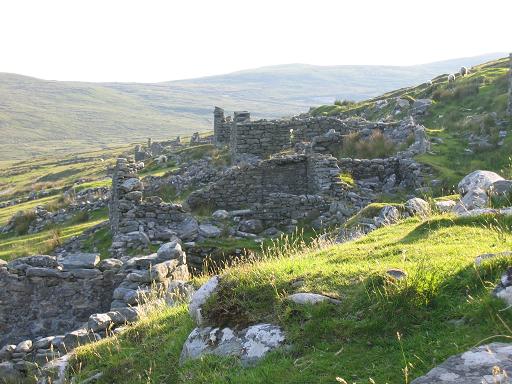 The Céide Fields in North Mayo will certainly give you a unique experience. For this is not just another archaeological monument or visitor centre. Here you can indulge yourself in a vast prehistoric landscape, a natural wild ecology of blanket bog, dramatic cliffs and coastline, and a much acclaimed building, which has received Ireland’s most prestigious architectural award.

Displays and exhibitions in English and Irish with written translations available in Dutch, French, German, Italian, Polish and Spanish

Guided walking tours of the site lasting between 45 – 60 minutes.